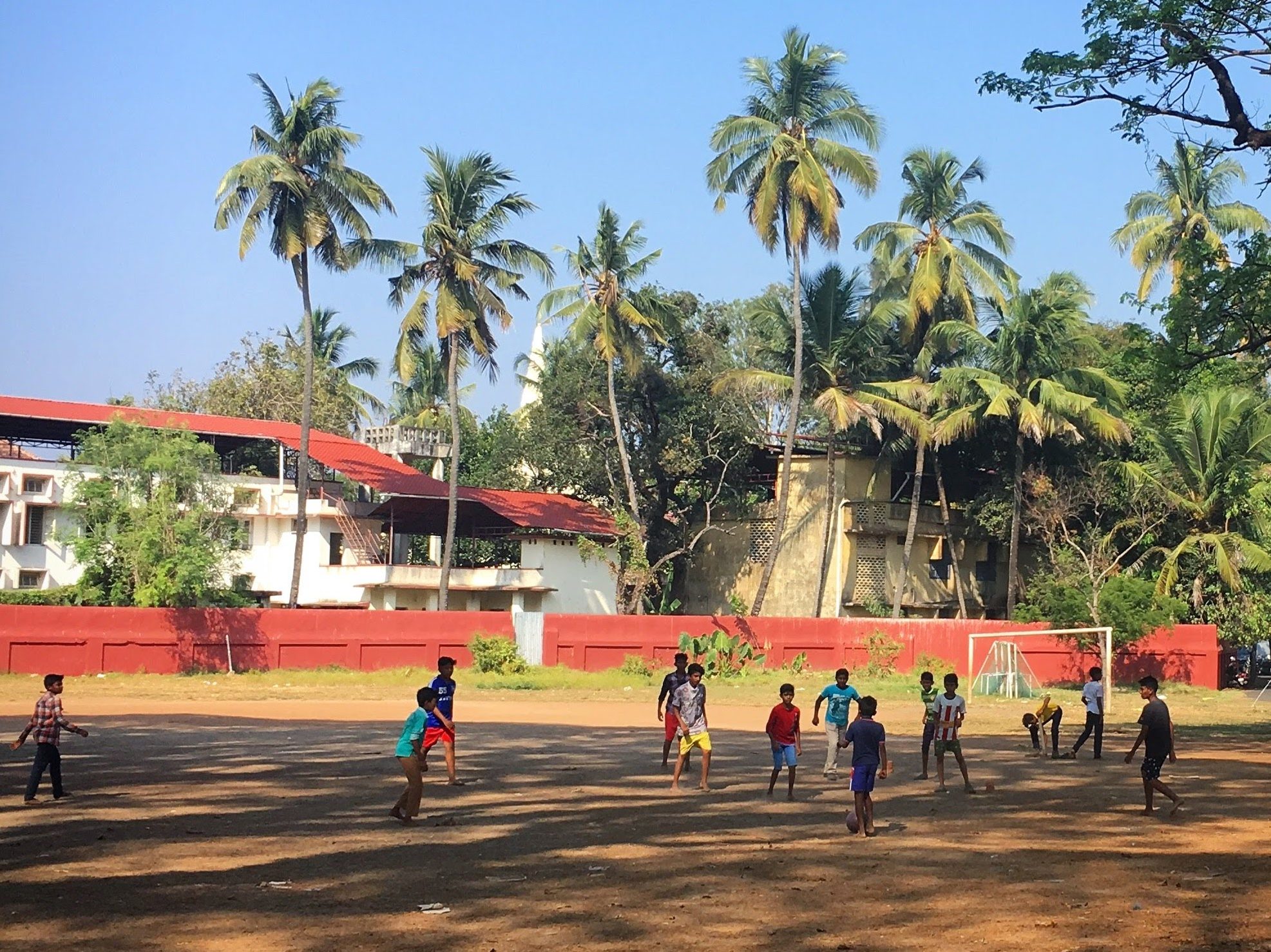 Kerala is a coastal state in the south-west of India, known for its natural beauty and unique culture. The geography ranges from palm trees and soft sandy beaches to the west, to dense rainforests in the east. To experience much of Kerala’s highlights, I recommend spending at least two weeks in Kerala!

The state has much to explore and experience: compared to the rest of India, Kerala has its own dance styles, cuisine, language, and music. Alongside the typical Hindu temples and Muslim mosques, there are many churches that serve Kerala’s large Christian population.

Kerala might be the ‘calmest’ and ‘safest’ state in all of India for those wanting to experience India without the stress and chaos that northern states in India are known for. You could easily spend a month or more exploring every corner of the state, but this two weeks in Kerala itinerary, attempts to hit a few key highlights. 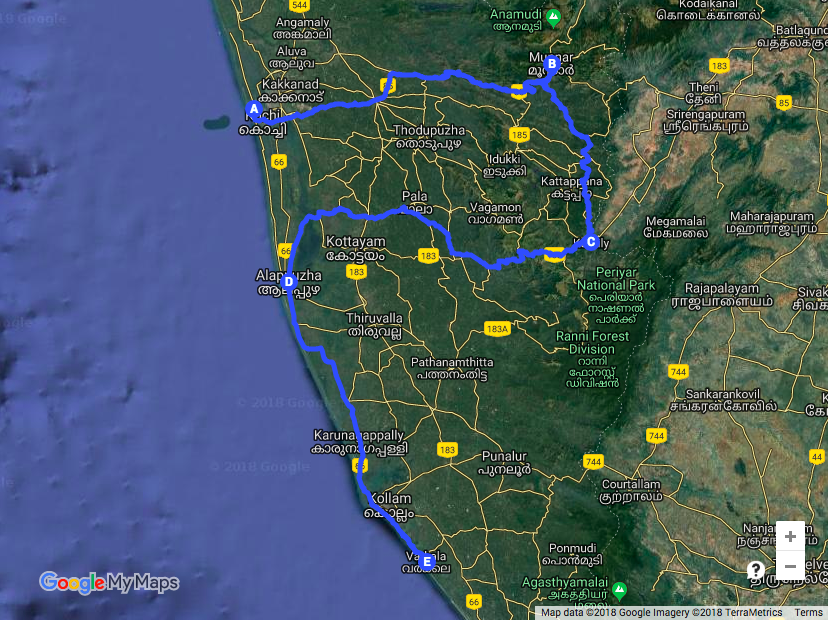 I traveled this exact route during my two weeks in Kerala itinerary, running from Fort Kochi in the north, down to Varkala. Although I met other backpackers in each town I visited, I travelled between towns on my own using public transit.

Solo female traveler in India? Is it safe?

I had no issues and never felt in danger for the entirety of my Kerala itinerary, even on public busses and trains. There was one incident when an aggressive monkey tried to steal food out of my bag but that was the only time I felt concerned for my well-being.

Fort Kochi is the historic center of Kochi town (you may see it spelled Cochin as well). It used to be a massive port and trading hub in India for Portuguese, Dutch, and British settlers. Although the town is distinctly India, just a few blocks away from the main streets you’ll experience uncharacteristically calm and quiet streets.

Your two weeks in Kerala itinerary will start here because it’s the main transport hub in the state, as well as the largest city and capital of Kerala.

Plenty of modern cafes and boutique clothing stores are hidden away in the streets of Fort Kochi. Although Kerala is a “dry” state where alcohol is not allowed and sales are strictly regulated, some of these restaurants will serve you beer in coffee pots if you ask! 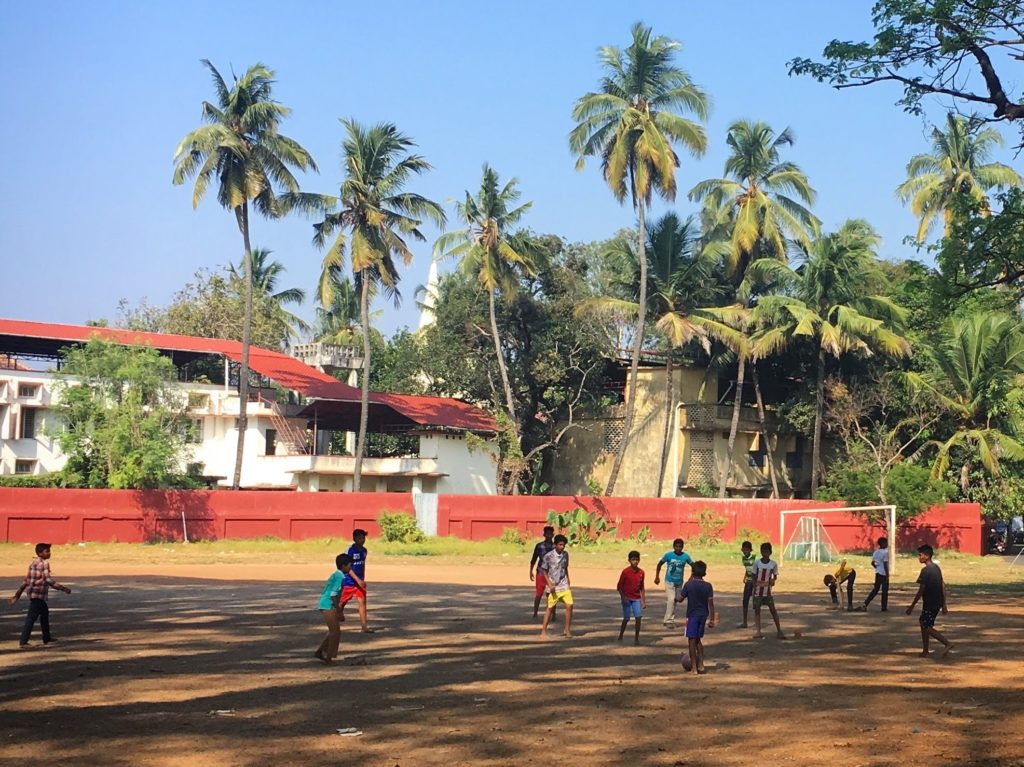 Things To Do in Fort Kochi:

Where To Stay in Fort Kochi:

The best budget hostel is the Happy Camper hostel which has a great rooftop terrace. Other backpackers recommend the Zostel Kochi.

Tip: Zostels are a chain of hostels throughout India that are known to have great amenities and are popular among local and foreign backpackers alike! If you plan on spending a while in India traveling around, they have a rewards program too.

Munnar is a town in central Kerala that is famous for its rolling hills covered in tea plantations. The town is a breath of fresh air and is a great place to relax while admiring the amazing views. 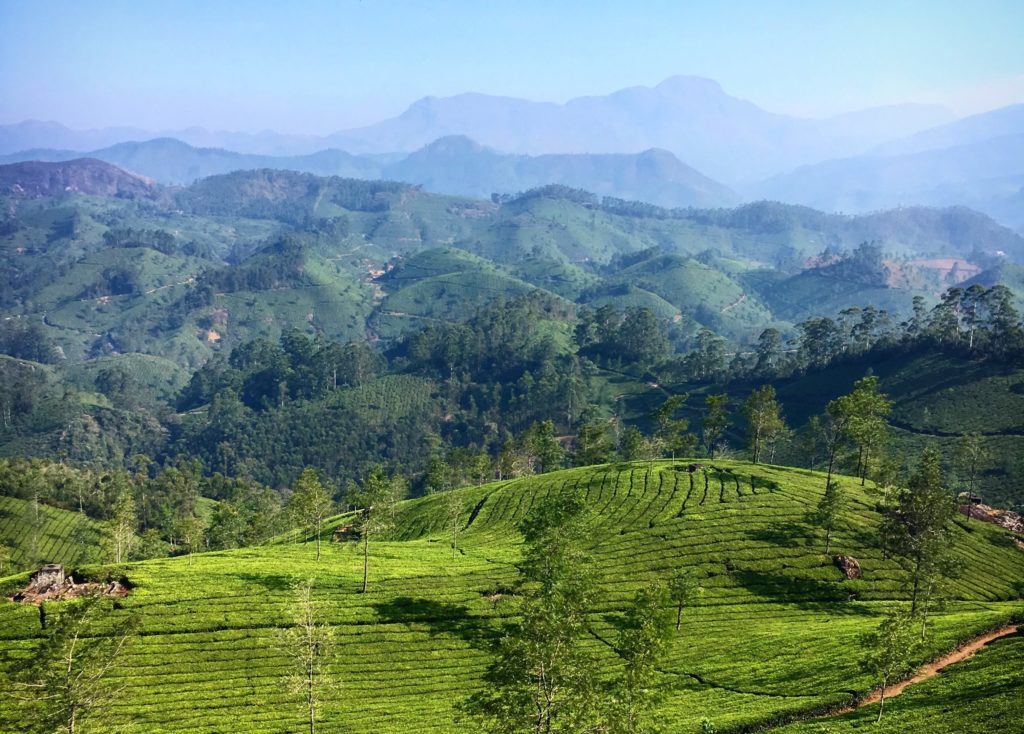 How to get from For Kochi to Munnar:

Take a bus from Fort Kochi to Munnar (book at any travel agency) for your next stop on your two weeks in Kerala itinerary.

You may need to take a local bus from Fort Kochi to a more centralized bus station in town, then transfer to a long-distance bus.

It’ll take about 2-3 hours to reach Munnar by bus from Fort Kochi.

Things To Do In Munnar:

Two French friends I was with bought $50 worth of spices at the Munnar market to bring home with them. Probably worth closer to $300 in France!

Where To Stay In Munnar:

For some reason there are not many cheap guesthouse options for Munnar on hotel booking websites. There are SO MANY cheap guesthouses in Munnar, it’s possible to just arrive and ask around for a room. Remember to negotiate hard! I ended up spending 200 rupees (less than $3 USD) per night for a single room, for two nights.

Thekaddy is famous for its Periyar Tiger Reserve and nature park, where many expensive tours guaranteeing large animal sightings draws tourists in. Most things such as jeep safaris, overnight camping tours, and treks with a guide, will cost you anywhere from $40-$100 USD. 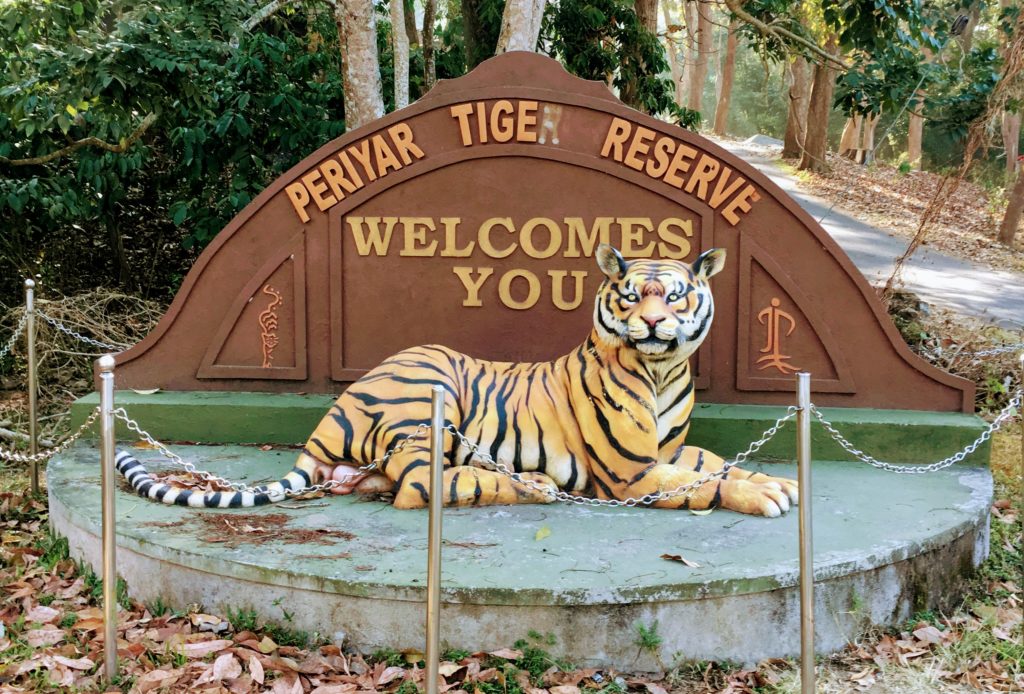 How to get from Munnar to Thekaddy:

Things To Do In Thekaddy:

In total I paid 450 rupees for park entrance for foreigners, 225 rupees for the 2-hour boat tour, and 250 rupees to do the ‘nature walk’, which was walking 30 minutes or so to and from where the boat leaves from ($13 total).

Where To Stay In Thekaddy:

I booked Jungle Paradiso homestay at the last minute, which is on the north side of town. It was a little out of the way since the Tiger reserve is south of town, so I recommend staying south.

Allappuzha, or Allepy, is a famous town in Kerala known for its house boat tours on the “backwaters”, a system of rivers and canals that wind through the country side.

The backwaters are dotted with marshes, agricultural plots, and little villages perfect for exploring during your two weeks in Kerala itinerary.

How to get from Thekaddy to Allepy:

From Thekaddy/Kumily you can take the local KSRTC bus again to Allappuzha. After Kochi, Allappuzha is probably one of the most popular destinations in Kerala for locals and tourists.

Things To Do In Allepy:

It’s common for tourists to rent an entire houseboat with a driver for a couple of hours or even days to navigate these back waters.

I joined a day tour that the hostel offered, which included a local ferry ride to a woman’s home on the backwaters who served us a traditional Kerala lunch.

After lunch we split into groups of 6, each got a small paddle boat with a driver, and set off into the small canals of the backwaters. I really enjoyed getting a glimpse at the daily lives of the families who were washing their clothes along the canal, and kids splashing around in the water or walking their goats to the water.

The cheapest way to view these backwaters is to just take the local ferry, which goes for less than 100 rupees all around the different ferry ports in the area. Although it won’t go into the smaller canals, you’ll be able to see many other houseboats floating lazily by.

Where To Stay In Allepey:

I stayed at the Artpackers.Life Hostel, which I recommend for backpackers. They have a large outdoor seating area with cushions where you can meet a lot of travelers. It’s also walking distance to the beach and to a government-owned liquor store.

If you prefer, there’s a Zostel here as well!

Varkala is a relaxation/yoga/meditation paradise in Kerala. It’s home to one of the cleanest beaches I’ve seen in India, and you can sit out in a bikini with ALMOST no creepy men coming by and taking pictures of you. This is partially because of all the Russian tourists who flock here year-round in their bikinis, so the locals are used to women showing more skin.

How to get from Allepy to Varkala:

The train from Allepy to Varkala takes about 2-2.5 hours and will cost less than 100 rupees ($1.5 USD) for a second class ticket. There’s no purpose in buying a sleeping booth ticket because it’ll be crowded enough that you’ll lose your bed (unless you curl up on the top bunk with all the luggage, which is what I did)

Things To Do In Varkala: 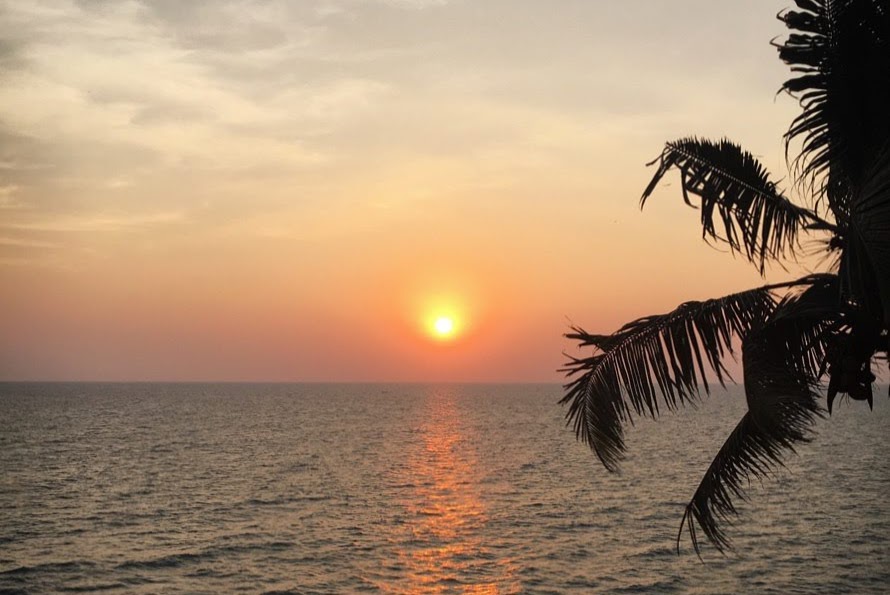 Where To Stay In Varkala:

I stayed at a hostel near Varkala cliff that is no longer in operation, but there are plenty of nice guesthouse and hostel options that are walking distance to the beach.

Varkala is the perfect place to relax and finish up your two-week Kerala itinerary. Because of its train station, Varkala is well connected when trying to get to other states in India or back to Kochi if you are flying to a new destination from there. 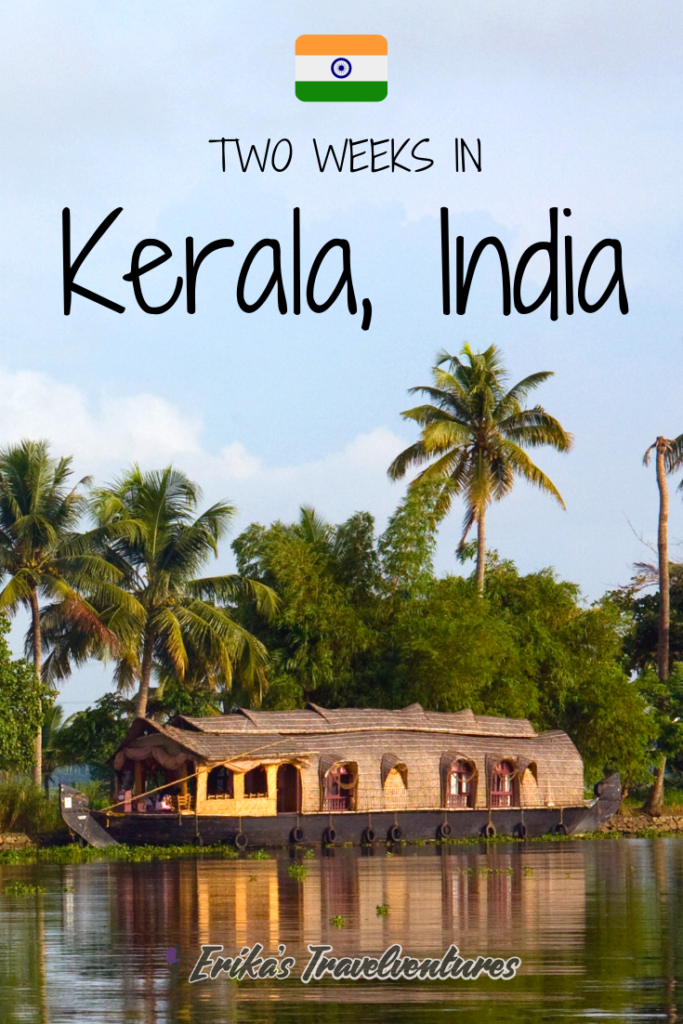 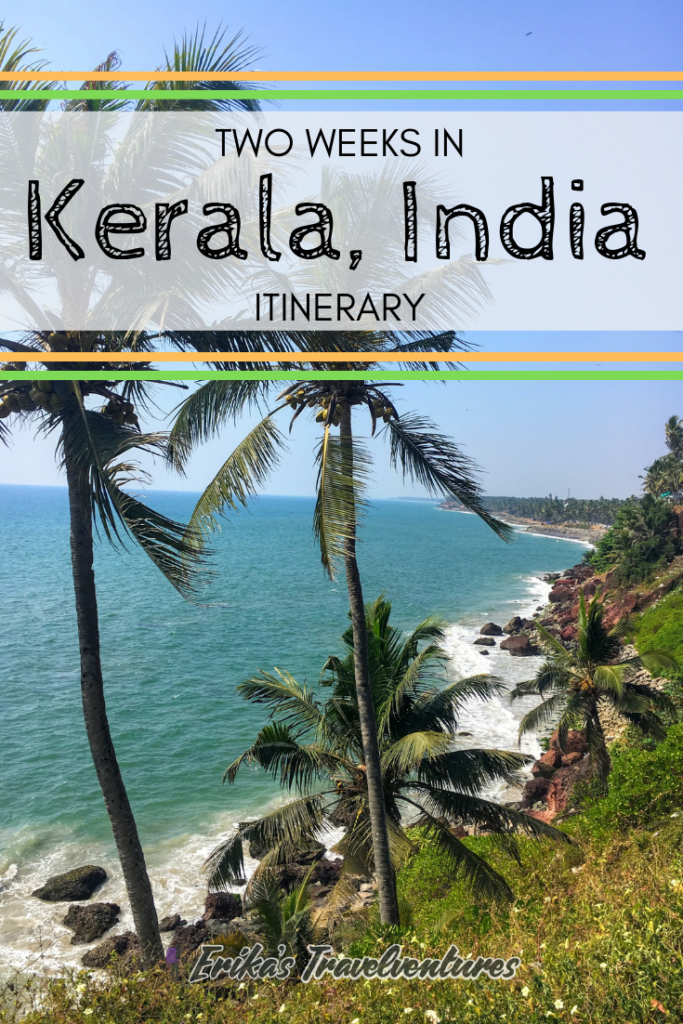 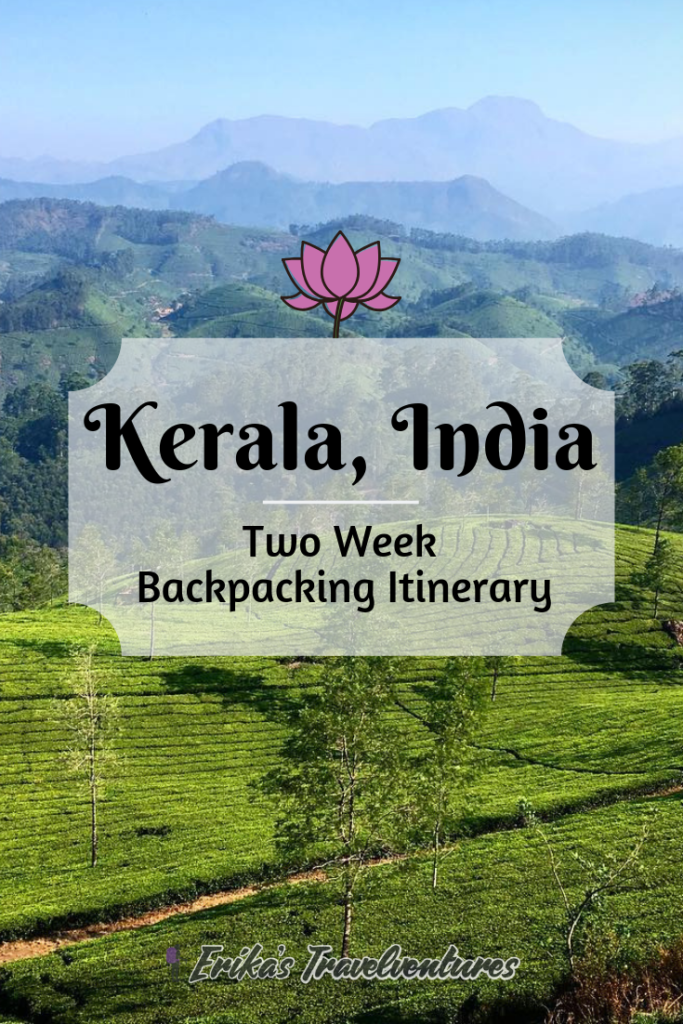